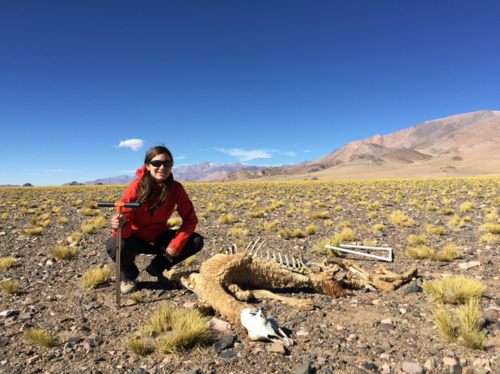 From January through April of 2019, I conducted field research for my dissertation in San Guillermo National Park in San Juan Province, Argentina. My research seeks to understand the role of vertebrate food webs, and particularly predator-prey interactions between pumas (Puma concolor) and vicuñas (Vicugna vicugna), on biogeochemical cycling in the High Andean desert. My goal was specifically to investigate the effect of puma-killed vicuña carcasses on soil and plant nutrients, as these carcasses are abundant on the landscape and may be important forms of nutrient recycling in a dry desert landscape otherwise devoid of plant litter.

In San Guillermo, vicuñas are the dominant herbivore on the landscape, and pumas have historically been responsible for nearly 90% of vicuña mortality. Throughout the season, my assistants and I hiked around the park to carcasses that were between 1-5 years old that my collaborator had identified during a prior study of collared pumas and vicuñas. At each carcass which we found intact, we collected soil samples beneath the carcasses, beneath the stomach contents that pumas had excised near the kill site, and at a control site 6m from the carcass. We also collected a selection plant samples growing out of carcasses and stomachs as well as at control sites.

Once the samples arrive at Yale, I will analyze them for nutrient content to determine whether puma-killed carcasses significantly influence biogeochemical cycling in soil and plants. I will further compare these results to a predation risk map created by my collaborators to determine whether there is correlation between risk and nutrient availability on the landscape, which could potentially be fueled by a positive feedback between predation, decomposition, nutrient availability, and plant cover, which in turn provides greater cover for predators.

My field site in San Guillermo is extremely remote: reaching it involved flying to Buenos Aires, and from Buenos Aires to San Juan, where I met my assistant with our field truck and we stocked up on supplies. From there we drove to Rodeo, the small town that houses the National Park headquarters and where we must pass physical exams to determine our fitness for living at high elevation. From Rodeo, it is a roughly 6 hour drive down dirt roads and across multiple river crossings to reach the National Park at nearly 12,000 feet above sea level. At one point, my assistant and I went 33 days without seeing any other people. Conducting research in San Guillermo is both a struggle and a privilege, and would not have been possible without generous support from the Center for Latin American and Iberian Studies.

During the trip, not only was I able to conduct my research, but I also had the luck to see five pumas during my field season (including the one pictured). Puma sightings are much more common in San Guillermo than nearly anywhere else in the predator’s range, probably due to low cover and low human activity, giving the animals little to fear. 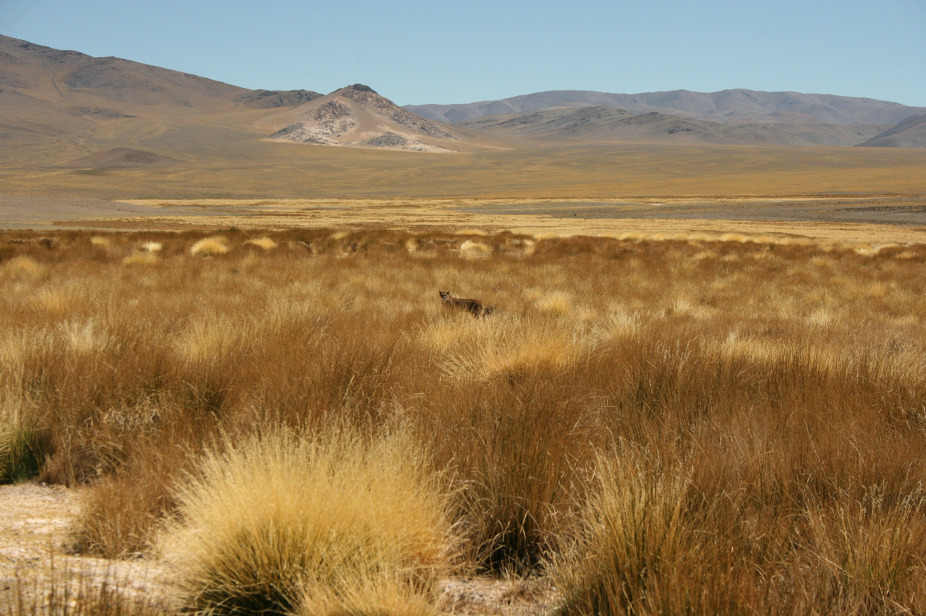