Jaguar Populations in the Bolivian Amazon 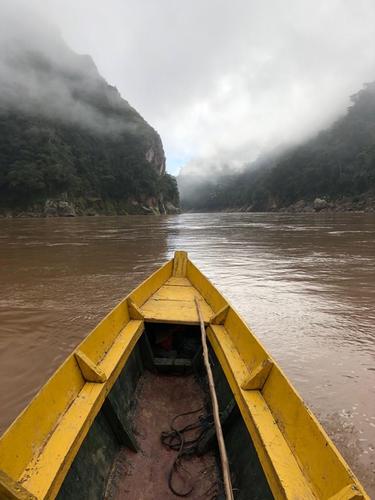 Courtney Anderson, Masters of Environmental Science, School of the Environment

Species across the world are going extinct at an alarming rate and the changing climate will only exacerbate this.  In the face of this global extinction crisis, there is mounting pressure for countries to establish protected areas and work to ensure the preservation of their natural treasures.  There is growing research, however, that suggests that conventional systems of “protection” may not be as effective as once thought.  The Madidi National Protected Area in the Bolivian Amazon is actually a collection of adjacent protected areas of different classifications, with different management strategies. Iconic species of the area, including jaguar and ocelots, are under considerable pressure from habitat loss and illegal hunting connected to the international wildlife trade.  Taking advantage of this region’s unique combination of management techniques in a contiguous forest, my research uses camera trap data to compare populations of several species of wild cat among different areas in order to assess any potential effect. In addition to contributing to important monitoring projects in the park, my objective is to better understand how use of protected areas and their management impacts the species that they are intended to protect.

Arriving in Bolivia on June 4, a crucial few days were spent on a combination of adjusting to La Paz’s altitude and meeting with research personnel at the office of my collaborators at the Bolivian chapter of the Wildlife Conservation Society (WCS).  We reviewed equipment, made some last minute purchases, packed up our gear, and prepared to leave for the field.  On June 9, we flew to Rurrenabaque, a small city on the Rio Beni that serves as a staging point for entry into the Madidi National Park and surrounding areas.  Two days later we were loaded on the boats and headed to our first field site along the Rio Quiquibey, in the Pilon Lajas Biosphere Reserve and Indigenous Territory.

After a few days to set up the camp that would be our new home, the real work started.  The Quiquibey site was divided into a grid and the team set out in pairs to begin the process of installing 60 camera trap stations (totaling 120 field cameras).  This took us a few days but, once up, these cameras were left to monitor for 40 days.  With cameras up and running, we shifted gears to another type of data collection: field sign. “Sign” in this case means any definitive evidence that a target species was in the area, including tracks, scat, burrows, etc.  This work was not directly related to my research but was important for my collaborators and we all worked together to get all data collected.

The field sign collection method involved an intensive search along transects throughout the gridded area.  Each grid that contained a camera station (60 total, each 1km x 1km) was investigated for sign.  We walked three 600m transects within each grid, noting any example of sign, the species that produced it, what type of habitat it was found in, and where it was located (GPS points). WCS is interested in monitoring all mammals in the area as well as the larger gamebirds that are targeted for subsistence hunting by the local communities.  Of particular interest are the predator species, such as jaguar, ocelot, margay, and bush dog, which are known to be in decline.

Another animal detection method was conducted using longer, permanent transects. The team worked together to cut and clear four 4km transects running in different directions from the camp.  These long transects are walked in pairs, where the goal is to move slowly and as quietly as possible to maximize animal detection.  When any of these animals was seen, we collected data on the time of day, habitat type, number of individuals observed, activity of the animal before detection, and a few other variables that allow WCS to maintain an idea of how these populations are doing and where they hang out.

After the 40 days of letting the cameras monitor the area, we collected them all, deconstructed the camp, loaded up the boats, and moved to our next site: along the Rio Hondo in an area within the Madidi National Park.  Here we built a new camp, set out the cameras again in a similar grid system, and started the process over again.  New transects were cut for monitoring, another round of grid cells was selected for collecting data on field sign, and the cameras were left for another 40 days.  Unfortunately, a few weeks into our time at the Hondo site, it was time for me to leave Bolivia.  The country only allows Americans a total of 90 days in country per year, and my 90 days were nearly up.  So the boat took me back to Rurrenabaque and I flew back to the office at La Paz.

I did plan a week in La Paz to do some preliminary analysis and data organization before I left the country – and all of my collaborators.  I spent that week in the office, organizing camera trap photos, making sure I had all of the relevant habitat data, etc, while I still had WCS staff around to answer my million questions.  The photos, once collected, have to be “tagged” with a software that codes each photo with the GPS location, species shown, habitat data, etc.  This means manually going through each of our roughly 60,000 photos, looking for any animals, and marking what they are.  It takes a very, very long time.  I was grateful for that week to get a head start because I assumed (very accurately) that it would be difficult to find the time to work on it once I got back to campus.

In my desire to maximize my time in the field and use every one of my 90 allotted days, I actually returned to the US after classes had resumed at Yale.  Coming back to campus late, having to move in and catch up on classes while still adjusting to my return to modern conveniences like plumbing and electricity, was more than a bit of a struggle. Even knowing that now, I would do it again. The forest at Madidi, the amazing team of local guides and WCS researchers, and the sheer enjoyment of collecting field data were all well worth it. I saw incredible wildlife on a daily basis, worked with extraordinary people, and had an altogether fantastic experience. Funding such an excursion is not cheap and it is not easy.  CLAIS and this travel award were one of several sources of funding that made this encounter possible, and I could not be more grateful. 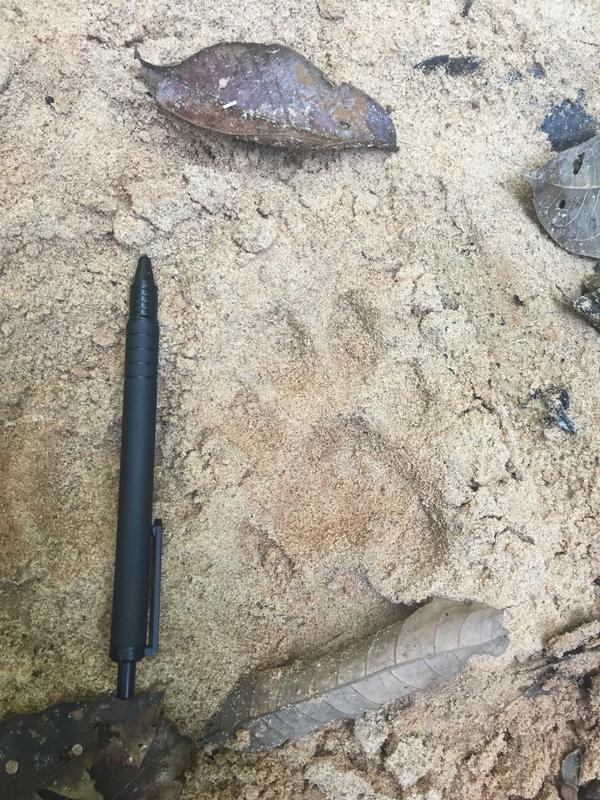 Puma track with pen for scale 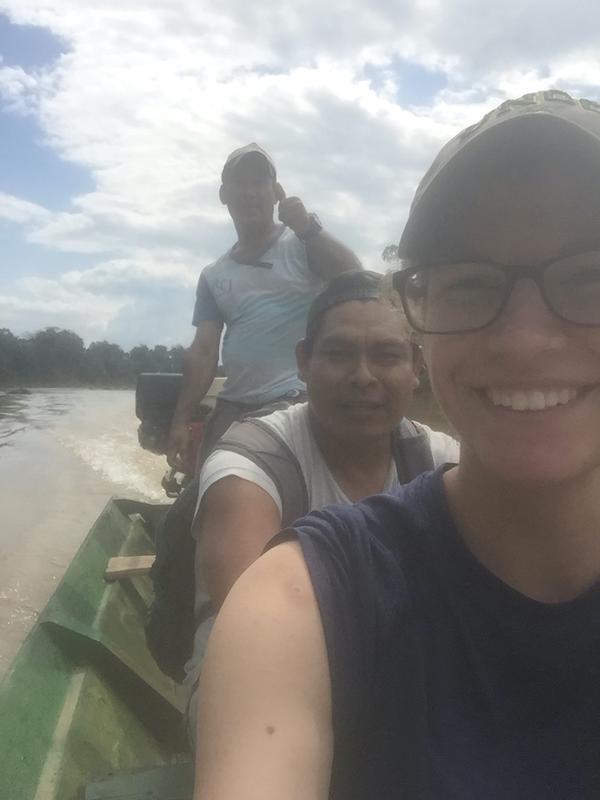 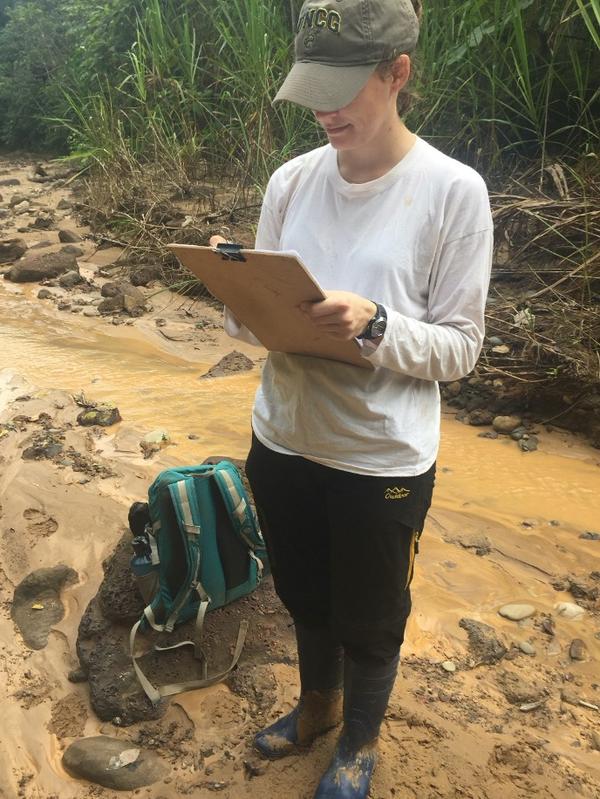 Me taking data on field sign in a stream 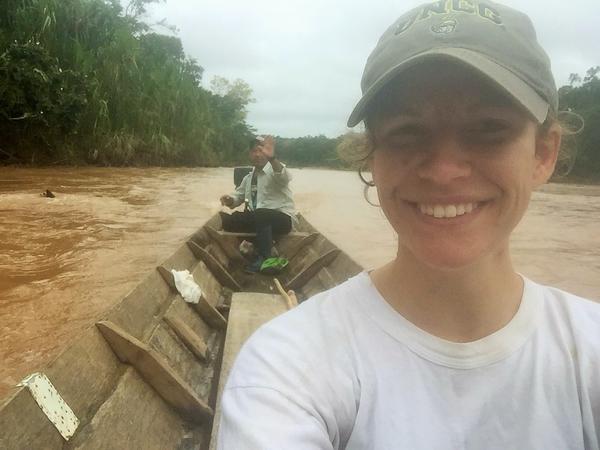 Me and guide Cayo on our way back to camp after a long day!