On April 11, the Council on Latin American and Iberian Studies (CLAIS) at The MacMillan Center welcomed Professor Pablo Vidal-González, cultural anthropologist from Universidad Católica de Valencia. Professor Vidal-González presented stunning images from a collaborative photographic project with David Cantillo, entitled Caminos Sagrados - Sacred Paths: Immaterial Heritage in Spain, A photographic project by David Cantillo & Pablo Vidal. With incredible beauty, the project documents the little-known annual pilgrimage from the village of Culla to San Juan de Peñagolosa and the shrine of the Virgin of La Estrella in Castellón, Spain, a route passing through twenty-five beautiful miles of plains, hills, and mountain paths around Easter each year.

Yale undergraduate, graduate, and professional students, CLAIS faculty and affiliates, and members of the New Haven community joined the event featuring Spanish food, drink, and music to celebrate the project and learn more from Professor Vidal-González. After being introduced by chair of the Council on Latin American and Iberian Studies, Susan Stokes, Professor Vidal-González spoke about the project, its meaning, and its inspiration. 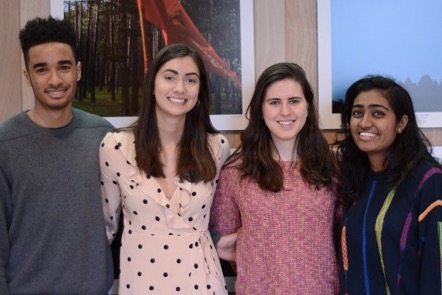 some yale college students had a chance to be a part of the pilgrimage as part of their summer session in valencia last year. some of them attended the reception. from left to right: rhasaan bovell, adriana lopez, maya rodriguez, nitya rayapati (yale college ’19)

What drew you to the Culla pilgrimage?

The pilgrimage is not among the most popular in Spain or even in Castellón. Of course, because city folks mostly don’t know about it, much knowledge about the pilgrimage – its history, continued tradition, and rituals are a secret to most. But people come from hundreds of miles to attend this little-known pilgrimage that passes through twenty-five miles of beautiful, changing landscape. And its participants are connected to Culla, the village where the pilgrimage starts and ends. As a cultural anthropologist, I am of course interested in symbols, rituals, and history. I wanted to learn what kept the pilgrimage alive when others were so much more popular and well-known than this one. I wanted to learn how such a small village had retained such a strong link to this tradition, even as much of its population left for cities along Spain’s eastern coastline. I wanted to know who went on the pilgrimage and why, especially when the village was not a densely populated one. I wanted to know its history and its future, as well as what it meant to its faithful participants.

How did you learn the answers to those questions?

Really, I started by interviewing people in the village and in the end, everyone, from the youngest to the oldest residents. This meant speaking with eighty-year-old villagers who could recall the pilgrimages of the 1940s, and who recounted the changes in the village’s life since then.  One of the reason the tradition has lasted since the fourteenth century is how the families of the village have passed down the tradition to each new generation because the village itself, like any space, has of course gone through moments of change and transition. In the 1960s, in particular, it was nearly abandoned. What kept the culture and tradition alive and connected people who left the village for the coastal cities and elsewhere, was the pilgrimage. But I also had to conduct deep archival research in Culla’s village archive. There are documents that can be traced back to the fourteenth century that describe the past practices of the pilgrimage. Some of the rituals are the same today- for instance, the way the procession moves through the landscape is identical to how it was conducted in the past. Flag bearers are followed by men flanked in two lines, followed by religious authorities, who are followed by two flanks of women. At the back of the procession, horses and their tenders are present. This method is still pursued today, though when there is little space for two flanks, they become singular. Most of all, it was the participants themselves who shared their stories, memories, and views on the pilgrimage’s past and present – as well as its future.

Is there anything that has changed since the fourteenth century?

There are remarkable similarities between the way the pilgrimage was organized in the fourteenth century and now – it is very much a ritual – that has kept the village alive even since many left the village in the 1960s. In fact, it was almost abandoned at one point during that period. The pilgrimage brought back those with connections to village every year and kept their collections alive. Of course, today, people also have different religious motivations for participating and often participate on their own terms. That is different, no doubt, from the fourteenth century participants. Today, some participate to find moments of silence, isolation, or prayer. But what has not changed? People still pray for the same three things – water, health, and peace. They may attach different meaning to each. Some might think of water as a way to think about stability and calm. Others might wish for the health of family members or themselves. And some may wish for peace in a universal sense, or among family members and at work. Of course modern life makes some of the interpretations different. But the symbols remain the same. And so too, do the rituals that create meaning out of these practices.

Why is the pilgrimage still alive?

It is a central part of peoples’ identity. Their memory. Their intangible heritage. The repetition of the ritual, and the coming together of neighbors. The pilgrimage is linked to the very being of the village – it is a common refrain among pilgrims to say “we are here because we must be here.” Those living in Barcelona come every year to attend the pilgrimage. A one-hundred and five year old woman travels two hundred and fifty miles every year, not now to walk the entire pilgrimage as she once did, but to participate in the ritual in the village. Something as everyday as walking, together, carries such meaning to the people connected to Culla.

What did you learn from doing the pilgrimage yourself with the community of Culla?

I felt the deepness of the community’s link to this practice. When you leave the village at 6am as a group, those that remain say “please return tomorrow”.  Participants end the day as a group. When walking through the mountains, Latin songs are sung in exactly the same way as they were in the fourteenth century. There are moments of silence, preying, singing, and feeling belonging to others as the pilgrimage moves through the countryside. Walking alongside one another, these members of the community share an experience and a bond. It is different to more famous routes in Spain like El Camino de Santiago because the procession is entirely communal, with some two hundred community members walking the train as a group, for much of it in total silence. It is important to understand the way the pilgrimage moves through countryside as something of an organism. Everyone has their place. I also learned that community members also use the time surrounding the pilgrimage as a moment to talk and exchange news. Essentially, they use it to keep the village alive. It is a moment where good relations are insisted upon – all else is forgotten – no grudges are kept. It is also a tiring ritual. The terrains are different, some more difficult than others. One arrives back in the village exhausted but content along with hundreds of others who share the same experience.

You’ve spoken much about the ritual’s past – what about its future?

It’s conceivable that the book I’ll be finishing and this project will make the pilgrimage more popular. More popularity might change the practice. I focus on this in the book, to learn about how the villagers view the ritual’s future and what concerns they might have about its future. Crucially, they are not concerned – everyone is welcome to join the pilgrimage, but the ritual must remain the same. It must move in the same way it always has, have the same route, the same moments of silence, song, and preying. The population can change, but villagers are firm that the tradition must persist.

What is next for the project?

I am finishing a book based on the research, interviews, and experiences. During 2017 and 2018, we had the honor of being able to present our work at the Cervantes Institute in Tokyo and in Culla. After Yale, we’ll head to Boston College and Nazareth College in Rochester, New York to present the photographic project. All of these opportunities are an honor but a great responsibility. We are always representing both our own project and the people who made the project possible.

More information on the Project can be found at www.caminossagrados.es