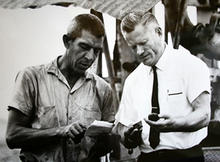 Approximately twenty historians from North America, Latin America, and Europe recently convened on the Yale campus for a conference to analyze the role of “experts and expertise” in Latin America’s “long Cold War.”

The conference, titled “Traveling Technocrats: Experts and Expertise in Latin America’s Long Cold War,” welcomed visiting scholars from as far afield as Argentina, Chile, Cuba, Puerto Rico, the United Kingdom, and across the United States to share their own brand of traveling expertise. The event, co-organized by Yale Department of History Ph.D. Candidates Andra Chastain and Timothy Lorek, took place at the MacMillan Center on October 14-15, 2016.

Yale has become something of a center for the study of the Cold War in Latin America. Previous conferences and workshops organized by Gilbert M. Joseph, Farnam Professor of History and International Studies at Yale, have gathered leading scholars to re-examine the experience of a distinctive “Latin American Cold War,” to use Joseph’s phrase, beyond the notion of a United States-Soviet Union bipolar policy Cold War acting in (or upon) Latin America. This emphasis centers its historical gaze from the perspective of Latin America, rather than from the perspective of the United States or the Soviet Union. In this way, Latin Americanist scholars seek to break out of the sphere of Grand Strategy or U.S. Foreign Relations in order to contextualize the international Cold War within longer cultural histories of Latin America.

Influential volumes that have resulted from previous gatherings include In from the Cold: Latin America’s New Encounter with the Cold War, edited by Gilbert M. Joseph and Daniella Spenser (Duke University Press, 2008) and A Century of Revolution: Insurgent and Counterinsurgent Violence during Latin America’s Long Cold War, edited by Greg Grandin and Joseph (Duke, 2010).

The conference organizers designed the conference this October to be the latest in Yale’s initiative in Latin American Cold War studies, in dialogue with this growing body of scholarship.

Chastain and Lorek framed the gathering as an opportunity to bring together scholars that have overlapping inquiries but who ordinarily may not be in dialogue or participate in the same conference panels. In particular, they sought to unite the subfields of the Latin American Cold War, Environmental History, and the History of Science and Technology.

As Chastain noted in her introductory remarks, these three subfields share a number of questions related to the conference theme, including “Who constitutes an expert and why? Where do experts originate? How do they travel and who funds their work? How was expertise negotiated on the ground by local, national, and international actors?”

There is a timeliness to reinvigorating the study of experts and the way they shaped the Cold War in Latin America, Lorek added. He noted the legacies of Cold War struggles playing out in current events, from the easing of U.S. relations with Cuba, to the negotiation and recently failed vote for peace accords in Colombia. Lorek also issued an invitation for conference participants to think about their “own role as ‘experts’ in constructing or reconstructing narratives of a ‘long Cold War’ in Latin America.”

The first panel on Friday offered keynote remarks from representatives of the three scholarly subfields. Joseph offered a summary of Yale’s on-going initiative in Latin American Cold War studies, as well as his thoughts on the future directions of this work. Eden Medina, of Indiana University, then presented on the contributions History of Science and Technology could offer on the subject. Finally, Mark Carey, of the University of Oregon, presented on environmental history in a talk entitled “Nature and Politics of Knowledge.” All three participants on the Keynote Panel revisited the issue of the contemporary relevance of this work, a subject which came up throughout the conference.

Several Yale faculty members served as panel discussants, including Paul Sabin (Professor in the Department of History), James C. Scott (Sterling Professor of Political Science and Professor of Anthropology), and Marcela Echeverri (Assistant Professor in the Department of History). Paulo Drinot, Senior Lecturer at the Institute of the Americas, University College London, also offered commentary and moderated an audience discussion of final reflections.

Participants and audience members left the event on Saturday afternoon with an invigorated sense of purpose for the study of experts and expertise, both in the context of bringing new perspectives to the history of Latin America’s Cold War, and as a means for reflecting upon contemporary political challenges.