Jessica Krug and Vincent Brown Discuss Resistance in the Caribbean 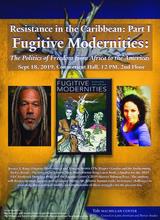 Resistance in the Caribbean - Part I | Fugitive Modernities: The Politics of Freedom from Africa to the Americas

What are “reputational geographies”? How is it that certain geographies come to mean something? How do reputations flow?

On Wednesday, September 18,  Jessica A. Krug, author of Fugitive Modernities: Kisama and the Politics of Freedom and Vincent Brown, author of The Reaper’s Garden: Death and Power in the World of Atlantic Slavery and Tacky’s Revolt: The Story of an Atlantic Slave War discussed question such as these at a public panel in Connecticut Hall. This talk was the first in a two-part series exploring “Resistance in the Caribbean” organized by Anne Eller, Associate Professor of History.

Krug’s book explores the Kisama, a political identity of those fleeing the expanding states and violence of the trans-Atlantic slave trade that emerged in West Central Africa (present-day Angola) in the early seventeenth century. Krug follows this “Kisama meme” through Africa and into the Portuguese and Spanish Americas, exploring the intellectual, political, and social histories of the Kisama and their transnational reputation for resistance.

Krug  explained why she describes Kisama as a meme, “ it moves as a stable set of political signifiers through a very turbulent world.” Rather than follow bodies or people, she follows ideas. She emphasized that this understanding of Kisama is not exceptional to Kisama identity, but rather is a result of taking a different approach to questions of identity. Brown and Krug discussed that the way historians often approach identities, and especially African identities, is informed by colonial anthropology, presenting identities as stable and tied to origins ( eg. “These people are from this place and do these things”). Krug made it clear that she wants scholars to attempt something different in the ways we think and write about identity. Rather than thinking of identities as stable, Krug and Brown discussed what it would mean to move from thinking about identities, places, and events and instead think about the processes and transformations that produce them as archived events.

One of the ways that Krug does this is through a methodological approach that bridges archival, ethnographic, and oral history. Using these methods she aims to read archives through the lens of the ways that people talk about them and ultimately understand the worlds that people were creating as fugitives.
This interdisciplinary approach made it possible for her to make several interventions about the intersections of time and geography. Her work pushes against the dominant national and regional frames that often dictate how we tell history – be they nation-based, the Atlantic-world, or histories of colonialism – and the ways that those frames can prevent us from understanding the world from the perspective of those whom we are studying.

Both Krug and Brown’s new and forthcoming works continue to probe these questions. Vincent Brown’s book Tackey’s Revolt: The History of an Atlantic Slave War traces the roots, routes, and reverberations of the largest slave revolt in the eighteenth-century British Atlantic world, positioning the revolt within a world of wars within wars.

Jessica Krug’s next book Fathers of No Nation explores the relationship between seminal fugitive/resistance leaders and the gendered politics of authority and state in São Tomé, Brazil, the Dominican Republic, and Jamaica from the sixteenth century through the present.

Fugitive Modernities is a finalist for the 2019 GLC Fredrick Douglas Prize and the Lapidus Center’s 2019 Harriet Tubman Prize.

This event was made possible with the support of the Edward J. and Dorothy Clarke Kempf Memorial Fund and the Whitney and Betty MacMillan Center for International and Area Studies at Yale.