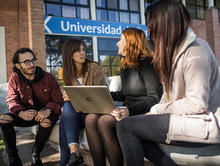 On Oct. 18, the Universidad de San Andrés and Yale University co-sponsored the conference, “Perspectives on Poverty and Human Development (link is external)” in Buenos Aires, Argentina. The event was held as part of the celebrations to mark the signing of the partnership agreement between the Fox Fellowship, which is headquartered at the MacMillan Center at Yale, and the Universidad de San Andrés (UdeSA). The day consisted of presentations and debates presented by academics, researchers, and professionals who reflected on the multiple dimensions of the themes of poverty and human development.

The day opened with a key note from Mushfiq Mobarak, a Yale University professor and founder of Y-Rise, an initiative at Yale that advances research on the effects of policy interventions when delivered at scale. He emphasized the need to understand the reasons why positive social impact behaviors meant to develop efficient public policies cannot be adopted in isolation. Using examples lead by Y-Rise in India and Chile, Mobarak suggested studying the effect of such policies more scientifically with controlled experiments. According to his presentation, randomness permits the analysis of effects from different disciplines and helps to reach a more successful solution to current social problems.

The first panel focused on “family economics and early childhood development,” and was coordinated by Mariano Tommasi, Director of the Center for Human Development Studies (CEDH). Tommasi discussed the significance of the family’s role in creating gaps between people with different income levels. With inequities that originate in the gestation period, the researcher highlighted the structural disadvantages with which children from the poorest families are born, which tend to continue throughout the life cycle. Among them, Tommasi highlighted the existence of nutritional problems, difficulties in accessing quality health and educational services, and the continuous modifications in family structures. The researcher also pointed out that any of the aforementioned disadvantages, added to overcrowded situations and environments exposed to environmental pollution, often prevent children born in poorer families from achieving their development potential. The economist stressed: “The literature suggests that family structure is very important in the development of children, so from the CEDH we are working to characterize, on a descriptive level, some aspects of family structure in different socio-economic settings.” He also warned that the probability of dying before the age of 50 for children born in unfavorable sectors is very high compared to the general public, as are the chances they face of dropping out of high school and having children during adolescence.

In line with the presentation of Professor Tommasi, Costas Meghir, Professor of Economics at Yale University and a specialist in income distribution and development economics, addressed the inequality in the evolution of child development, presenting results of research developed in Colombia on language, cognitive skills and the economic extremes of society. Joanne Tan, a specialist in education economics and applied economics, contributed to the family economics and early childhood development panel, adding that social mobility is not a geographical problem, but rather, mainly a problem of longterm segregation. Finally, Tony Sheldon, professor and executive director of “Program on Social Enterprise” at Yale University, focused on demonstrating how certain conditions affect communication between the world of academia and public management. In the light of his statements, the international development specialist proposed different practices to improve the link and coordination between both spheres and, thus, improve collaboration over time. He argued that by achieving such collaboration, the idiosyncrasy of the learning process in the implementation and design of development policies would allow us to reflect common views on the approach of different issues, agreements on solutions to problems to be solved and the body of relevant evidence (for example, through mistakes and failures from which common lessons can be learned). According to Sheldon, the “Graduation Approach” methodology, as it is commonly called, is currently being implemented little by little in high-poverty households to receive support from different organizations and/or governments.

The second panel addressed the theme of innovation, social enterprise and poverty alleviation and was led by Professor Gabriel Berger. Kate Cooney, a professor in Social Enterprise and Business, defined the SEs (Social Enterprises) as hybrid organizations that respond to a more traditional business logic but, in turn, have a philanthropic interest with which they guide the management of their human resources. Equally important, Nataliya Langburd Wright, a doctoral student at Harvard Business School, spoke about the impact of the digital economy in solving social problems.

Claudia Valeggia moderated the third panel on “Perspectives on Poverty,” in which researchers from different disciplines presented the various ways in which this topic is approached from their areas of expertise. Valeggia, who is a professor of anthropology and chair of the Council on Latin American and Iberian Studies at Yale, said: “Poverty is a multidimensional problem, in which each aspect has its place, like in a Rubik’s Cube, and each program that is implemented has multiple effects that must be taken into consideration.”

The first talk of the panel was given by Luz Horne, a professor at UdeSA and a doctor in Brazilian and Latin American literature.  In an exhibition that sought to mobilize the most entrenched beliefs in the public, she presented the various representations of poverty that exist in contemporary literature and cinema. She then invited the participants to ask themselves different questions: “The artistic representation of poverty has great political potential, but it is sometimes controversial and generates multiple questions: What is its real objective? Is it necessary? Does it teach us something new or confirm what we know? What are its consequences? Does it naturalize poverty or stereo type it? How can art be a tool for change? Questioning the audience about their own beliefs, the researcher sought to “generate debate about the status and potential of art.”

Tommy Murphy, professor of economics at UdeSA, explained: “When the goal is to measure poverty, we have to think of something basic: it must be a basket that allows us to cover basic needs, taking into account specificities of each region, to be able to build a subsistence index comparable in time and space that shows us the living conditions of the “not exceptionally unfortunate.”

Finally, David Bargueño, an American diplomat, merged the experiences of his professional and academic life, with diverse experiences in the United States, South Africa, and Brazil. He placed special emphasis on the importance of accountability when working for the full human development of all people. This is of fundamental importance to understand the dynamics of corruption in different countries that often undermine the potential that societies possess. He said that corruption is an issue that must be considered whenever you want to have a correct analysis of poverty.

For the Keynote lecture, Eduardo Fernandez Duque, professor of anthropology at Yale University, introduced Walter Sosa Escudero, a professor of economics at San Andrés. Sosa Escudero, who authored the book, Big Data, explained: “Big data is like sex in adolescence: everyone talks about it, but nobody knows very well what it is.” He spoke about the implications of the use of big data in public policies and the possible implications that its use could have on issues, such as the measurement of inflation or the construction of poverty indices. He stressed that you have to be careful when using big data techniques because many times the mass of data is not the equivalent of having relevant information. He concluded his talk by giving an overview of a project that is being carried out in the city of Córdoba, where knowledge and data science tools are used to measure deviations and improve the public transport service in that city.

At the conclusion of the conference, it was clear that while the accomplished academics, researchers, and professionals approached the theme of human development from various disciplines and experiences, they shared a common vision: poverty may be measured and understood in different ways, and that research does contribute to its reduction and, hopefully, one day to its eradication.

The Perspectives on Poverty and Human Development Conference was sponsored by the Universidad de San Andrés Center for Studies for Human Development and the Fox International Fellowship and the Council on Latin American and Iberian Studies, which are both a part of the MacMillan Center at Yale University.