Police and Legitimacy in the Americas 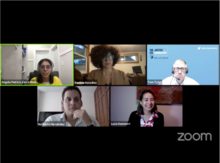 On October 6th, the Council on Latin American and Iberian Studies was glad to be a part of a discussion led by Angela Zorro Medina, J.S.D. Candidate at the Yale Law School and a CLAIS Graduate & Professional School Affiliate on “Policing and Legitimacy in the Americas.” From Canada to Chile, the past year has seen an explosion in social movement protest against police brutality. Calls for ending police violence are not new, but the current political moment seems ripe with transformative possibility.

While social movements have put the issue of police reform and abolition on the public agenda, the current political context throughout the Americas offers a bewildering context for implementing reforms. This panel convened experts on policing in the United States, Colombia and Chile to explore how calls for police reform are playing out across the continent.

Macklin Fleming Professor of Law and Psychology at Yale University, Tom R. Tyler, started off the conversation by sharing insights from The Justice Collaboratory [https://law.yale.edu/justice-collaboratory] at the Yale Law School. Research from the Justice Collaboratory shows that principles of procedural justice can play a role in de-escalating violence in police encounters. Procedural justice involves training police officers, and changing organizations, so that they center dignity and respect, trustworthiness, neutrality, and other values in their public interactions.

One place where procedural justice training have been tested with positive results is in Mexico City. Professor Tyler shared how police officers trained in procedural fairness were found to use lower levels of force. The issue of excessive force is entwined with broader legitimacy of the police in the eyes of the public, and is more important than overall crime levels, which have been falling for decades, in shaping public perception of police legitimacy in the United States.

Lucía Dammert, Professor at the Universidad de Santiago de Chile and senior public policy advisor at the national and international level, distinguished between police legitimacy in the United States and Latin America. In the United States, police legitimacy has been associated with trust, while in Latin America it has been linked to inefficiency, corruption, and abuse.

In November 2019, police in Santiago, Chile responded brutally to protests against inequality, killing dozens and energizing social movements against police violence. Professor Dammert pointed to a recent survey she conducted in Chile, in which people believed that the protestors’ use of force in their responses to police abuses was justified.

This was an important historical shift in attitudes, but one that she notes is not unprecedented. Public attitudes to the police in Latin America tend to shift following particular scandals, but implementing durable reform of the police has proven more challenging. High levels of crime are part of the reason why pursuing structural reform is difficult over the long term, creating some ambiguity around police reform in the region.

Yanilda Gonzalez, Assistant Professor at the Harvard Kennedy School of Government, referred to the case of Colombia, where calls for police reform since the 1980s have also followed this pattern of scandal and reaction, with little long-term effect on increasing police legitimacy or decreasing violence. In the past, most reforms to the police have targeted operational or other minor issues, not touching police autonomy within the broader power structure. While public trust in the police has remained relatively low for years in Colombia, certain arms of the police associated with excessive force, like the Mobile Anti-Disturbance Squadron (ESMAD), are actually relatively popular.

Professor Dammert responded to the Colombian case outlined by Professor Gonzalez. When discussing the legitimacy of the police in Latin America, issues of “trust” were often less important to producing sustainable reform than perceived effectiveness in a context of high rates of violent crime in the society. While excessive force drives the conversation on police reform in the United States, the cases of Chile and Colombia suggest the importance of transparency and scandals in affecting public confidence in the police.