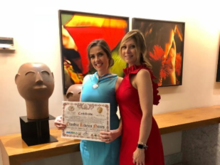 On Friday, October 19, CLAIS Visiting Fellow Claudia Ribeiro Pereira Nunes was awarded the title of Ambassador of the Culture of Peace and Justice and the Sérgio Vieira de Mello Medal by the International Council of Honor and Merits at their annual event in Brasilia, Brazil.

The medal is named in honor of Brazilian Sérgio Vieira de Mello, who dedicated over 3 decades to a career in the United Nations where he worked to defend peace and humanitarian causes. Known as a pragmatic negotiator and generous leader, Vieira de Mello was the UN’s highest authority in Iraq and became the UN High Commissioner for Human Rights in 2002. He was killed, along with 20 members of his staff, in the Canal Hotel Bombing in Iraq in 2003.

Since 2010 this medal and the accompanying title of Ambassador of the Culture of Peace and Justice is granted yearly to persons who have given exceptional service in international humanitarian law, humanitarian assistance, or the promotion of peace and human rights. It honors the legacy of Vieira de Mello in the promotion of sustainable peace, international security and better living conditions for individuals in situations of armed conflict.