Roundtable on Protests in Latin America 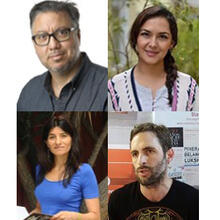 Over 80 people virtually attended the Roundtable on Protests in Latin America, a Spanish-language webinar hosted by the Council for Latin American and Iberian Studies, on Wednesday, October 7. The event was moderated by Professor Maria Jose Hierro who is currently teaching a course at Yale in the Political Science Department on Political Protests.

In this webinar, four leading journalists (pictured above) from across Latin America came together to analyze and address the parallels within last year’s series of protests in various countries including Chile, Peru, and Ecuador.

The panelists began with Boris Muñoz, discussing the broad context of the region as well as the ties between different countries. After providing examples of manifestations of social, economic, and political arrangements that were not working for Latin American populations, he discussed how countries experience a breakdown of order when the government is disconnected from the needs of the people, which, in countries like Chile became evident due to the pandemic. In Peru, discontent with the political order rests on a succession of presidents with pending investigations and impeachment processes, reflecting a broader pattern in Latin America of citizens losing faith in democracy. In Bolivia, President Morales was asked to leave office, as citizens realized elected leaders do not guarantee efficacy. In Ecuador, the cause of unrest was an economic package in the form of a loan from the IMF, which generated a significant wave of protests in the country, pointing to a general reality of Latin American countries reflecting global economic crisis and instability.

Fowks continued the conversation by analyzing the January 1st protests in Peru and the high volume of social and political actions which have occurred since then, which exposed the power of President Vizcarra to suspend democracy. The causes of these protests typically are social and environmental, revealing the unmet expectations of the people of both private groups such as mining companies and various levels of government. 20 years of violence and unrest in Peru have also led to the stigmatization of dissenters and all who oppose the regime as terrorists. The people’s demands have consequently been silenced as dissenters try to avoid, incarceration, or associated with violent groups. For many Latin American countries, Chile served as an inspiration, modeling recovery and modernization through trade and commerce. Economic policies Peru borrowed from Chile in the midst of the pandemic exposed the fault of its economic structure, in which 70% of workers’ informal employment guaranteed them no labor rights.

Next, Matamala provided a brief presentation of the protests in Chile, elaborating on the idea that protesters were not simply dissatisfied with economic outcomes such as wages, but a long-term crisis of expectations. Despite decreases in poverty over the past 30 years since the Pinochet dictatorship, Chile remains very low ranked globally for income equality. Increases in university attendance and tuition costs have led to mounting debt, and little change in the proportion of elite students positions, including in government, given to graduates of the same few elite schools. As a result, protesters adopted the moral justification that if elites don’t have to follow rules to maintain wealth, they also should not have to follow rules such as paying high fares to live.

Finally, Borja honed in on the long tradition of indigenous resistance in Ecuador, tying in last year’s anti-government protests with the history of social protests resulting in the ousting of leaders. More specially, she described how indigenous resistance movements in the country have been integral inciting larger nationwide social movements, as was noted in last year’s protests. Borja then shifted to examining these protests within the context of the greater political situation of the country before they had begun. Lenín Moreno, who assumed the presidency in 2017, had inherited the political environment from Rafael Correa. Given that Moreno had been vice president under Correa for six years, there had been an expectation that Moreno would follow Correa’s legacy and maintain the same political plan. However, in May 2017, there was a profound political rift between Moreno and Correa, inciting a distinct fragmentation within the larger political party and the government. In response to this, Moreno developed relationships with news outlets and newspapers—relationships that had never been seen before between the media and the government. Several months after Moreno assumed power, the government faced a series of crises, including a crisis on the Columbian front and the kidnapping and assassination of three journalists. The government’s response to these crises ultimately led to the nationwide protests witnessed last October because the people questioned Moreno’s ability to govern.

Following these interviews, the audience participated in a lively and thoughtful Q&A session covering the consequences of these demonstrations on political and electoral trends.