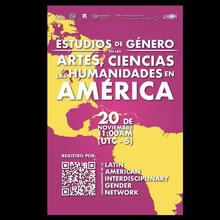 On November 20, Council on Latin American & Iberian Studies (CLAIS) at the Whitney and Betty MacMillan Center for International and Area Studies at Yale University and Universidad Nacional Autónoma de México (UNAM) through the Center for Research and Gender Studies (CIEG) and Center for Mexican Studies in Boston launched the Latin American Interdisciplinary Gender Network (LAIGN).

As part of its launch, the three institutions virtually hosted the well-attended Gender Studies in the Arts, Sciences, and Humanities in the Americas conference.

Welcoming remarks for the conference were provided by Claudia Valeggia, chair of the Council for Latin American and Iberian Studies and Professor of Anthropology at Yale University. The first roundtable discussion, moderated by Amneris Chaparro Martínez, Academic Secretary of CIEG UNAM, focused on the topic, “Importance of Gender Studies.” During the discussion, Benjamín Juárez Echenique, Director of the Center for Mexican Studies at UNAM-Boston emphasized the importance of examining the emerging new voices throughout Latin America.

Moira Fradinger, Associate Professor of Comparative Literature at Yale University pointed to the de-patriarchalization of dissident protest movements. Fradinger argued that it was more important now than ever to utilize the current interconnectivity of societies to inspire different forms of resistance around the world. Fradinger suggested utilizing research and questions to facilitate critical thinking and to foster that resistance.

Lucía Ciccia, Associate Researcher at CIEG UNAM, discussed how the incorporation of different gender perspectives is fundamental for weaving together global networks. Ciccia argued that by doing so, it allows us to recognize that our current way of thinking and perceiving are not neutral or unbiased.

For her part, Alicia Girón, from the Institute for Economic Research, Coordinator of the University Program for Studies on Asia and Africa at UNAM, focused her presentation on the theme of feminist economics. According to Girón, feminist economics centers around the economy of care, as well as the economy of life and social reproduction with significant intersections between class, ethnicity, gender, race and economic spaces.

The second roundtable was moderated by Alí Siles, researcher at CIEG UNAM. During the roundtable, the coordinators of each working group discussed their approaches and goals for the working groups moving forward. Consuelo Denmark Noack from the University of Chile presented the group “Gender and Education”; Veronica Montes from Bryn Mawr College represents the group “Gender and Feminist Theory”.

According to Helena López, a researcher at CIEG UNAM, the “Gender, Arts and Humanities” working group has 30 scholars from across the different universities. The group is currently examining the theme of decolonial feminism. Meanwhile, the “Gender in Science, Technology and Innovation” working ground, led by Ciccia, hopes to identify how university enrollment in certain areas is socialized since childhood. Additionally, they will analyze the production of subjectivities from the notion of the body located.

Dr. Bouquet discussed the numerous manifestations of gender inequality within the university: segregation by sex within academic departments, gender violence against students and faculty, the inequalities produced by sexual division of productive versus reproductive labor, and the impact of gender bias. Dr. Buquet believes that in addressing gender inequality in society, we “need specialists in gender to be able to investigate and research where these unequal systmes come from and how they operate.” Moreover, she argued while the creation of gender studies departments are crucial, there needs to be more specialization in gender in not just a single department, but in all academic areas.

At UNAM - a large, national university serving more than forty thousand people - Dr. Buquet has found that it is crucial that these interventions be taken on the local, community level as opposed to only university- wide initiatives. She argued that while structural change is necessary, in order to successfully address the specific needs and issues facing the different communities and departments within the university, it is necessary to look inward and at each instance and begin change there.

Dr. Buquet closed her keynote speech by discussing a few of the many possible actions she believes universities and academics can take to address issues of gender inequality within their spaces. She suggested initiatives to eliminate gender bias in all determinations of pay, evaluations, and rank, to actively combat discrimination and gender violence, and to incorporate the perspective of gender in all aspects of academic work. In addressing these fundamental inequalities, Dr. Buquet believes that academic work can only become “more innovative, more diverse, more creative, and more excellent.”

LAIGN brings together an academic community of over 100 scholars, including doctoral and postdoctoral students from 35 universities throughout the Americas. Its main objective is to produce bilingual academic and cultural scholarship to foster knowledge about and provide solutions to gender-related issues from across a wide range of disciplines. To learn more about LAIGN or to join the network, please visit its website here.

To read the press release in Spanish regarding the launch of LAIGN and the conference provided by CIEG UNAM, please see here.