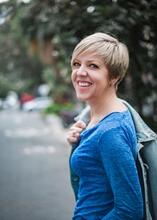 The following interview is part of the Council on Latin American and Iberian Studies’ Alumni Spotlight series.

Could you tell us a little bit about yourself?

From a young age, I knew I would dedicate my career to making the world a more inclusive, just place. When my professional life actually began, this took the form of working to ensure that everyone has a voice—a say in what happens in their individual lives and society—and opportunities to use that voice. In 2012, after more than 20 years working on countless civil liberties and civil rights issues, I began freelancing, ultimately going on to establish my own small business, C. Strickland Consulting, Inc.Through my consulting, I help mission-driven organizations achieve transformative change through effective development, communications, and public policy strategies.

Ensuring that people have a voice is the primary thread that strings together my life’s activities. The other common thread is a focus on place. Perhaps as a result of my upbringing as a preacher’s kid in the small-town Deep South, a geographic area steeped in a sense of place, I have always been fascinated by the meaning and implications of place—from how humans create and are defined by place to how a place’s culture and traditions shape individual outcomes. My BA in Latin American Studies is a clear manifestation of this focus, as is perhaps my choice to live in Colombia, the country I have now called home for more than eight years.

How was your time at Yale? Can you share a few memories that you think might encapsulate your experience?

I arrived to Yale with a very thick Southern accent and limited world exposure. Yale was overwhelming, but this was balanced by delight in all there was to learn and enjoy. Of my college options, I chose Yale because of the students I met when I visited. I remember walking into Commons for the first time and seeing the “table tents” on every table—the (not-very-environmental-but-there-were-no-other-options!) piles of hard copy flyers that student groups used to distribute to promote upcoming events. I was shocked by the initiatives Yale students were undertaking of their own volition. I jumped right in and was later elected as the 105thPresident of the Yale Political Union. I was only the fifth woman to serve as president of what was then Yale’s largest student organization.

On a volunteer basis, I taught piano at a local elementary school, led Silliman’s holiday handbell choir, and worked in a paleontology lab at the Peabody Museum. I remember Sterling Professor of Hispanic and Comparative Literatures, Roberto González Echevarría, declaring, “You’re scared!” when I went to tell him I was dropping his Spanish-language class on literature from the time of the Conquest. “Terrified!” I replied, and we both laughed. I dropped the class, but enjoyed others with Prof. Echevarría. I remember fondly a seminar with Margaret E. Keck, for which I wrote a paper about the reconstitution of the judiciary as part of stabilizing democracy in Chile post-Pinochet. And I probably would not have made it through Yale or have the career I have today without Jay Jennings’ freshman year writing course or Bruce Shapiro’s senior seminar in investigative journalism.

What made you decide to become a Latin American Studies major? Was there anything in particular that you were interested in from Latin America?

I entered Yale thinking I would be an MB&B (molecular biophysics and biochemistry) major. It only took one chemistry class to rid me of that notion. After that, it was a free for all—I had so many different interests that I vowed to take classes in as many disciplines as possible. I considered everything; I played the harp and even considered majoring in music performance. By my junior year, when I was told I had to choose, I looked over all the courses I had taken and realized that I had chosen a Latin American Studies course every single semester. (Geology & Geophysics was a close follow-up; I almost decided to double major.) I had done so without thinking, out of sheer interest and enjoyment. I decided that should mean something. I now recognize my choice of Latin American Studies as one of the first times I truly followed my passion. I credit my high school Spanish teacher, Kay Lowe, with igniting that passion; she didn’t just teach the language—she opened whole new nations and cultures to us. She later accompanied me to Cuba for the research I did for my senior paper.

How has the Latin American Studies major influenced your life, professionally and/or personally?

My coursework related to consolidation of democracy in Latin America, particularly after authoritarian regimes, gave me important context and perspective on the United States’ own system of government—about the changes it has undergone, potential threats, and ways that it can expand or contract. The major shaped my thinking about how representative democracies become and remain stable; my thinking in turn shaped my years of work to protect and extend voting rights in the US. I don’t think I would have been nearly as confident in my advocacy in the US had I not had the context and understanding that the Latin American Studies major provided. Of course, the major’s language requirements have come in handy time and again. From my first job in Seattle, at the Latinx community service center, El Centro de la Raza, to my time in Miami at the American Civil Liberties Union (ACLU) of Florida, being bilingual has opened doors. It has also made my life here in Colombia possible. In general, the major made me aware of the complexities of the countries and cultures that compose Latin America. This awareness has made it far easier to dive into new environments, navigate places with which I’m unfamiliar, and build bridges with people who come from cultures different than my own. That last one has been invaluable to me in my career.

My first job after school was at El Centro de la Raza in Seattle, where I where I helped homeless, non-English-speaking men find jobs. To my recollection, with the exception of one person, all my co-workers were native Spanish speakers. At lunch, I struggled to keep up with office chit-chat in Spanish. With my clients, it was a bit easier—I knew our conversations would be about jobs and job skills, and so I could prepare. Thanks to my El Centro co-workers, I started salsa dancing, beginning a lifelong love affair with Latin music and dance. When I began working with the ACLU of Washington, my love of Latin music often led me to joke that I would go work for the ACLU of Florida, because they had sued to strike down a county ordinance that had prevented my favorite Cuban band, Los Van Van, from playing in a Miami-Dade County venue.

Little did I know that only a year or so later, right after the contested Bush v. Gore 2000 Presidential election, the ACLU of Florida would open a voting rights position that would bring together all my skills and experience. I moved to Miami, where I spent eight more years with the ACLU. Though I worked on every civil liberties issue, first as Voting Rights Project Director and then as Director of Public Policy and chief lobbyist at the state capitol, my biggest focus was on ending Florida’s Jim Crow-era ban on voting by people with past felony convictions. In the early 2000s, I was a key driver behind the founding of the statewide coalition, the Florida Rights Restoration Coalition, which later became a political powerhouse. One of my proudest moments was when, in 2018, in large part thanks to that coalition and its current leadership, Floridians voted to overturn Florida’s voting ban. I had achieved what I had set out to achieve — lasting policy change.

Now, I work for my own business. My current clients are based in the US; all are nonprofit organizations in whose work I believe deeply. I use my skills as a writer and consultant to help them garner the funds, design the programs, and achieve the policy reforms that will help them further their missions, most of which are related to racial, economic, and/or climate justice. Here in Medellín, I am also part of the inaugural board for Help Colombia, a foundation that has been working to provide food relief in the midst of the pandemic, and that will be working with residents at the neighborhood level to address the educational, nutritional, and economic priorities they identify. I find myself in a very fortunate position—in a place of opportunity and with the skills to take action—and I don’t believe any of this would have been possible without the Latin American Studies major.

During my freshman year, my friend Rafael Mandelman and I had a tradition of going to the Yale Art Gallery almost every Sunday afternoon. We’d view part of the collection and then go to Atticus for iced teas and a baguette with butter and jam. If I could go back now, I’d tell myself to maintain traditions like that, for all four years. They provided moments to breathe deeply, reflect, and disconnect. I’d also tell myself to exercise more regularly. I now know exercise to be critical to regulating my stress and emotions.

People at Yale are pretty much by definition achievement-oriented. This can be good or bad. My advice would be to worry less about “achieving” as the outside world defines that and more about what you want achieving to mean to you. You don’t have to know what you want to do or have your career mapped out. But it will help to start conceptualizing your own ideas of success, your own measures for personal progress. Also, while there is value in hard work—and hard work can be (and for me, is) a value in itself—fun is exactly the same. Make fun, just like hard work, a critical part of your existence and a value by which you live. You won’t regret it.