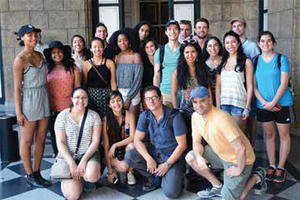 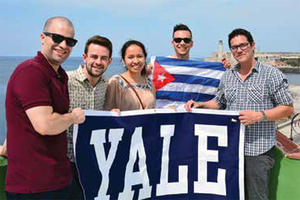 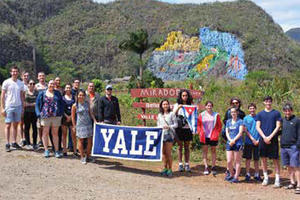 In 2016-17, CLAIS inaugurated one of its newest signature programs, the Cuba Initiative. The Fundación Antonio Núñez Jiménez (FANJ) in Cuba has been a committed and dedicated partner for the initiative. The administrative assistance and support to our students and scholars, including access to archives and libraries, provided by FANJ have been integral to the successes related to the Cuba Initiative at Yale.

As part of this initiative, CLAIS organizes a number of activities to highlight Cuban history, culture, and society throughout the year. The country is also incorporated and featured as part the CLAIS Film Series with films from Cuba and the CLAIS Cuba Initiative Speaker Series with researchers and scholars speaking about issues related to Cuba. The cornerstone of the initiative is an undergraduate course (History and Culture of Cuba) that includes a two-week class trip led by Professor Albert Laguna to Cuba. The course and the student experi- ences in Cuba have been very successful.

Yale has also appointed Dr. Reinaldo Funes-Monzote, Professor of History at the University of Havana, as the Henry Hart Rice Family Foundation Visiting Professor. His research is dedicated mainly to the Cuban and Caribbean Environmental History, with several academic articles and chapters in collective books about these issues. Dr. Funes facilitates much of the two-week class trips to Cuba and is a valuable resource to undergraduate and graduate students.