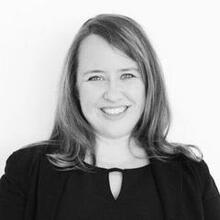 The following profile on Yale College alumna Ruth Alvarez-DeGolia was part of the Latin American and Iberian Studies Undergraduate Fellows Network and its Career Conversations series launch. Ruth was an Ethics, Politics, and Economics and International Studies double major while at Yale. Upon graduation, she co-founded Mercado Global, a social enterprise based in Brooklyn, New York and Panajachel, Guatemala.

The Council on Latin American & Iberian Studies Career Conversations series launched with a discussion of social entrepreneurship with a Yale alumna, Ruth Álvarez-DeGolia, in partnership with Yale-NUS College and the Global Health Studies Program at the Jackson Institute on February 10. The talk also launched the Latin American & Iberian Studies Undergraduate Fellows Network. The network supports engagement, research, and other opportunities for undergraduates, including Yale-NUS students.

Álvarez-DeGolia summarized a key theme in her career: “we believe in the power of markets to create social change.” Nonprofits, she says, only gain access to a small percentage of the United States’ GDP, and an even smaller percentage of that goes toward international causes. “We could instead figure out how to tap into overall GDP to help companies and people through what they do every day,” she said, using “their market share, their purchasing power, their supply chains, their work that they do every day, to help create social change.”

Mercado Global sources from weaving from Indigenous women in rural Guatemala, where many Indigenous families live in extreme poverty. Working with about 750 artists, Mercado Global exists to create a secure source of income for Indigenous women and their communities. The enterprise does this by helping establish community businesses owned by artists, and then connecting them to sales with international fashion retailers. Mercado Global thus creates a two-way relationship in sourcing and selling: “we help big retailers think about how they could start sourcing from artisans and indigenous communities in an empowering way.”

Álvarez-DeGolia recounted her time as an undergraduate at Yale, when her commitment to Indigenous communities in Guatemala began.At first, she said, she was drawn to fields of study that seemed especially competitive or prestigious: she pursued Directed Studies, then the Ethics, Politics, & Economics major, and also double-majored withInternational Studies. But it was the opportunity to live and work in a halfway house,in Harrisburg, Pennsylvania’s county prison, an experience funded by a Yale alumni fellowship, which piqued her interest in transitional justice. Then, when another summer fellowship opportunity in Cuba was cancelled, she pivoted at the last-minute toward Guatemala, and began working with an association of rural communities. “I had never felt so useful in my entire life,” she said. DeGolia delayed her return to the United States, and Yale, until a few days into the shopping period of that fall.

Now, serving the same communities, Álvarez-DeGolia shared some of the lessons she learned. Notably, Mercado Global experienced a 45% sales growth this year, by turning the COVID-19 health crisis into an opportunity to serve people in need, and find innovative solutions to problems. When the pandemic hit, and  Mercado Global’s usual buyers all but cancelled every order, DeGolia and her teams made a plan to use all overstock fabric into masks. The sales team became an outreach team, connecting the new mask-makers with to one hundred New York City hospitals and nursing homes. By selling and donating hundreds of thousands of masks to healthcare workers, postal workers, public housing residents, migrant farm workers, and Indigenous communities across the Americas, Mercado Global actually thrived by redesigning and reallocating resources.

Álvarez-DeGolia ended with some prudent advice: “Remember, sometimes, the best way to have the biggest impact is not to start your own organization or business. You can make the argument that what’s needed most is not more new organizations that are under-resourced, but, [rather], more really great board members for existing organizations, donors that are partners to those organizations, building them.”

This session introduces both the ongoing Career Conversations series and the Undergraduate Networks for the European Studies Council and Council for Latin American & Iberian Studies. Future events will be available on ESC and CLAIS websites.