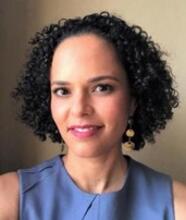 Using singular terms such as “complicity” to characterize the participation of Africans in the Atlantic slave trade is doubly problematic. Not only does it call upon - inadequately - the language of morality to approach a set of historical processes;it reduces centuries long, geographically widespread, culturally heterogeneous, and ever-changing phenomena to a single characterization.’

Cécile Fromont is associate professor in the Department of the History of Art at Yale. In her multiple award-winning books, she has helped show the centrality of Africa and Africans in creating the material and aesthetic underpinnings of modernity. She received her PhD from Harvard in 2008. Among her numerous professional recognitions, she was elected a 2018 Rome Prize fellow of the American Academy in Rome. As a member of CLAIS’s faculty network, Fromont brings deep expertise on the history and art history of the early modern Portuguese-speaking Atlantic.

‘A central goal of my scholarship is to push against a flattened vision of Africa and Africans in history. It strives to show the many ways –be they sophisticated or clumsy, successful or failed, generous or sinister – in which Africans and Afro-descendants have engaged with and participated in shaping the political, commercial, visual, and material networks of the Atlantic world.’

Making contributions to a number of fields of study, Fromont’s research places object histories at the center of debates about the character of the African slave trade and its constitutive role in shaping the commercial, religious, and political trajectories of the early modern Atlantic.

One common misconception about the Atlantic slave trade which Fromont’s work revises is that Africans traded their human cargo for European trifles, valueless objects manufactured for a generic taste.

‘In reality, the wares traded on the African coast encompassed a vertiginous complexity in their range, nature, combinations and fluctuating social and economic worth.’

In a chapter titled “The Taste of Others” in the book, Early Modern Things: Objects and their Histories, Fromont analyses documents from slave trading company archives alongside objects from museums to show the African influence in the creation, production, and circulation of luxury goods.

In a recently published article in the Journal of the American Academy of Religion, Fromont narrates the story of José Francisco, an enslaved man who was tried by the Inquisition for making and marketing bolsas de mandiga (translates literally to “mandiga bags”). At the time Franscisco was arrested by the Inquisition in Lisbon in 1730, the bags were used by men and women of all social and ethnic backgrounds. Fromont shows how they were also the product of African religious and aesthetic sensibilities. Their presence in an Inquisition trial points to the power, presence, and influence of Africans in a world shaped by the slave trade.

‘Over the years, I have traveled transversal paths through a number of European archives, examining them and interrogating their holdings not against the grain, but from angles their creators, compilers, and previous scholars had not considered. At first, it certainly came from instinctive, and overly optimistic ideas about what I believed they would or should hold. Now, with the benefit of hindsight, this method has become part of a deeper reflection about the invisible, and at time disavowed scaffolding that holds up European epistemologies and their manifestations in collections and archives.’

Fromont’s research is complemented by an impressive agenda in public outreach and curriculum development for primary and secondary education. For her, this outreach will help correct asymmetries in the historical memory of the slave trade in Europe and the Americas. Through these efforts, Fromont’s goal is no less than to ‘hone a new memory of the slave trade and of enslavement, with at its center the men and women caught in their machinery, and rebelling against it until the systems’ demise.’

Fromont is also shaping public memory on slavery and the slave trade through her work as a member of France’s Conseil scientifique de la Fondation pour la mémoire de l’esclavage, Scientific Council of the Foundation for the Memory of Slavery.

Although COVID-19 has put a temporary hold on international archival research, Fromont has remained connected to scholarly communities such as the Red Iberoamericana de Historiadoras and the Slavery and Visual Culture Working Group. Professor Fromont also places a high value on her work as a teacher and mentor.

‘In the past few months, my absolute priority has been teaching and mentoring, ushering our undergraduate and graduate students through such challenging times.’