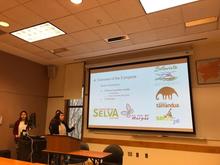 On April 8, the graduate student affiliates at the Council on Latin American and Iberian Studies (CLAIS) at the MacMillan Center presented the research they conducted this semester with the support of the CLAIS Student Network Fellowship Fund. Projects focused on conservation efforts in Mexico, Uruguay, and Ecuador, and they addressed ways in which communities near protected lands are increasingly turning to ecotourism as an alternative source of revenue.

The first project presentation, called “Conference Study Tour to La Selva Lacandona, Chiapas, Mexico,” was delivered by a group of seven Yale Forestry students who visited conservation projects organized by Natura Mexicana in the Lacandon Jungle. The projects centered around promoting ecotourism as an alternative to farming in the buffer region bordering the Biosphere Reserve. They described how each project followed a similar business model, incentivizing local peoples to set aside land for conservation in exchange for portions of revenue from ecotourism projects conducted on the land. On their trip, the group learned the importance of people-centered efforts that allow locals and indigenous peoples to get behind conservation efforts. The group consisted of Josefian Cobian, Melaina Dyck, Fabiola Hernandez, Renata Lozano Giral, Alberto Tordesillas Torres, Maria Urrutia Gonzalez, and Sandra Chiri Vargas.

Emily Sigman, a candidate for Master of Forestry and Master of Global Affairs, reflected on her trip to Cabo Polonio, Uruguay, in the presentation that followed, titled “A town in a national park? Or a national park in a town?” Sigman drew parallels between her Cabo Polonio trip and a previous research experience in Darhad Valley, Mongolia. She discussed how both locations have newly-established national parks, which force local populations to pursue sources of income other than hunting, which is the traditional way they make a living. They are also both rapidly opening up to ecotourism, giving rise to economic opportunities for locals. Sigman’s interest lies in the contentions between local populations and national entities over what constitutes conservation, and who bears the cost.

The last presentation, titled “Research on Ecotourism in Ecuador,” focused on the parish of Mariano Acosta where local communities are still working to coexist with the national park and the wildlife within it. Ben Zukowski, a Forestry and Environmental Science student, described the struggles that such communities face, including difficulty in incentivizing youth to stay and finding alternatives to farming. Talking about ecotourism, Zukowski discussed the Andean Bear Foundation, which was formed to study bears but quickly expanded to include collaborative programs, such as an education initiative that brings volunteers into the region to teach English. He noted that due to language barriers and lack of access to technology, communities often encounter difficulty advertising ecotourism despite structures that already exist to encourage tourism.