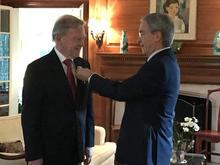 On June 8, Kenneth David Jackson, Professor of Portuguese and Brazilian Literatures and Director of Undergraduate Studies for Portuguese at Yale, was awarded the Officer honor of one of Brazil’s highest decorations, the Order of Rio Branco (Ordem de Rio Branco). The award of Brazil’s Ministry of Foreign Affairs is bestowed on individuals who have distinguished themselves in diplomacy, government, and civic engagement and have contributed to the promotion of Brazil’s relations with other countries. Professor Jackson received the award from the Consul General, Ambassador Fernando Mello Barreto, at a decoration ceremony in the Consul’s residence in Hartford.

Professor Jackson specializes in Portuguese and Brazilian literatures, modernist movements in literature and other arts, Portuguese literature and culture in Asia, poetry, music, and ethnography. He is the author of numerous books and academic articles on these topics. Over the past 25 years, he has built and developed the Portuguese program at Yale. The nomination for the Order of Rio Branco came shortly after last year’s conference “Brazilian Studies in the United States: The Road Ahead,” which Professor Jackson organized together with Stuart Schwartz, Professor of History at Yale.

The order of Rio Branco is an honorific honor of Brazil instituted in 1963 to commemorate José Paranhos, Baron of Rio Branco, who was Brazil’s foreign minister from 1902 until 1912 and came to be known as the father of Brazilian diplomacy. It is awarded annually to Brazilian and foreign individuals for their outstanding service and achievement.