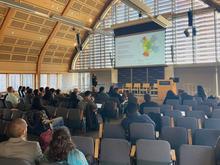 The fifth annual Sustainable Development in Latin America and the Caribbean conference, centered on the themes of people, capital and natural resources, drew more than 150 students, faculty and community members to Kroon Hall on February 14. The conference was hosted by the Yale School of Forestry & Environmental Studies and the MacMillan Center’s Council on Latin American and Iberian Studies.

“Part of our inspiration [for this year’s conference] was that we sense there’s a perception of Latin America as a space that needs help,” Ospina said. “But I think we know that it’s this really strong and vibrant and rich area with many different cultures, and we want to communicate that it’s a region of the world with a lot of agency.”

Ospina added that the curriculum at the Yale School of Forestry & Environmental Science does not always enable conversations about issues that happen outside of the United States.

For her, this conference was a space to explore global environmental issues and learn from international leaders, Ospina explained.

Visiting history professor Reinaldo Funes Monzote said the conference is primarily student-run and has been “a great experience.”

“It is wonderful to see the capacity of Latin American professionals … doing work in their region and [to see] how they contribute to their fields in and beyond Yale,” Funes Monzote said.

One such professional was the director of the Organization of American States’ Department for Social Inclusion Betilde Muñoz-Pogossian, who discussed the migrant and refugee crisis throughout the Americas in the first keynote address.

According to Muñoz-Pogossian, a person moving to another country has traditionally been classified as either a migrant or a refugee, depending on whether the movement was voluntary or if their home country forced them to leave.

“What we are finding for the case of Central Americans and Venezuelans is that the two categories have not been sufficient to guarantee protections for these people,” she said. “The majority [of immigrants in Latin American countries] are people who, although they have not been directly politically persecuted, have left because of a serious disruption of the public order, or because their economic, social, political and civil rights were not protected.”

According to Muñoz-Pogossian, a high number of incoming migrant population can be damaging for the country’s basic services such as health, education and food systems. In turn, migrants are placed in vulnerable positions with few options to find employment and are often forced to enter the illegal labor market, she said.

“Climate change constitutes one of, if not the single most, fundamental global threats to the right to life,” Muñoz-Pogossian said. “The already pre-existing socioeconomic vulnerabilities are exacerbated by humanitarian crises caused by natural phenomenon … which further widens the inequality gap in [Latin America, which is] already classified as the most unequal region in the world.”

The Latin America Program Director at the Natural Resources Defense Council Amanda Maxwell gave the second keynote address about the finances of a climate-minded, low-carbon future for Latin America.

Former Mexican Minister of Environment Julia Carabias delivered the third keynote address, where she spoke about the importance of maintaining biodiversity throughout the world. While very optimistic about potential measures to be taken in 2020 to prevent climate change, Carabias emphasized the importance of overcoming political obstacles before change can be instituted.

“The main problem is that there is a lack of political will,” Carabias said. “We have the technology. We have the human capital and the natural resources. There is the money, but there is not the will to put things in a different route because there are a lot of different interests.”

Written by Julia Brown for the Yale Daily News.